WATCH: AOC Pretends to Be Handcuffed After Arrest at Abortion Protest Outside of Supreme Court - Tucker

Far-left Rep. Alexandria Ocaso-Cortez (D-NY) on Tuesday seemingly pretended to be handcuffed after being escorted away during a pro-abortion protest outside of the Supreme Court, generating mockery across social media, as U.S. Capitol Police arrested over a dozen members of Congress.

The protest took place on Tuesday and featured several lawmakers, some of whom were actually arrested.

A viral video shows an officer escorting the New York lawmaker away from the Supreme Court as a nearby woman shouted, “Abortion rights are under attack!” Ocasio-Cortez can be seen walking with her hands behind her back, creating the illusion of being handcuffed. She then raises a fist in the air, confirming the absence of handcuffs. 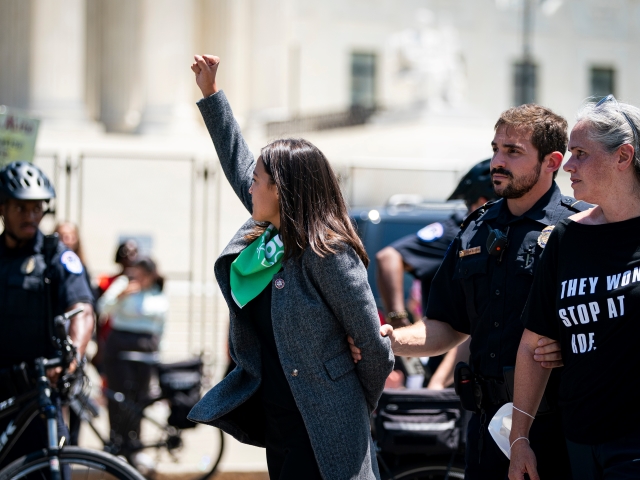 Representative Alexandria Ocasio-Cortez, a Democrat from New York, is arrested outside the US Supreme Court during a protest of the court overturning Roe v. Wade in Washington, D.C., US, on Tuesday, July 19, 2022. Photographer: Al Drago/Bloomberg via Getty Images

The stunt generated a wave of mockery across social media.

“That’s because she’s a performer, not a Congresswoman…” one user wrote.

One called her a fraud, and another user observed, “Almost as good as her fake crying at that random fence in Arizona.”

Some U.S. lawmakers — 16, according to authorities — were actually arrested. Ocasio-Cortez retweeted Axios reporter Andrew Solender, who said that Ocasio-Cortez was among those arrested.

Others were as well.

“This is Congresswoman Adams’ staff. She was just arrested protesting for abortion rights and reproductive justice at the Supreme Court. More information as it develops,” the staff for Rep. Alma Adams (D-NC) posted to her Twitter account on Tuesday:

Rep. Ilhan Omar (D-MN) was reportedly arrested as well. This news coincides with Capitol Police actively warning demonstrators that arrests would be made if they continued to block traffic: 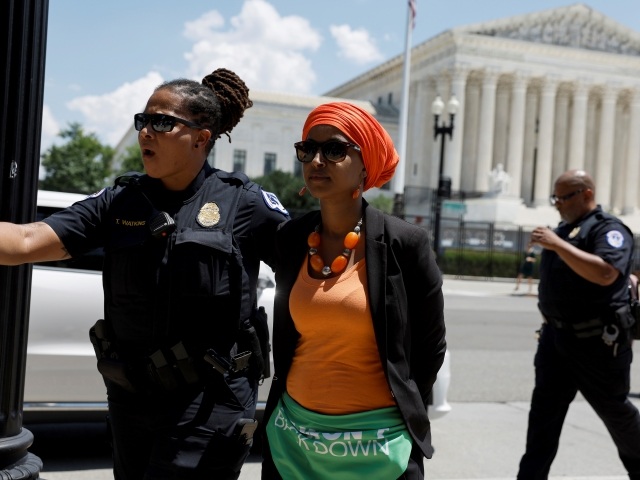 Rep. Ilhan Omar, (D-Minn.), is escorted away from a sit-in outside of the Supreme Court with members of Congress to protest the decision to overturn Roe v. Wade on Tuesday, July 19, 2022. (Tom Williams/CQ-Roll Call, Inc via Getty Images/)

“Demonstrators are starting to block First Street, NE. It is against the law to block traffic, so officers are going to give our standard three warnings before they start making arrests,” Capitol Police posted to social media around 1:18 p.m. Eastern, later adding that “some of the demonstrators are refusing to get out of the street, so we are starting to make arrests”:

According to an update, police made 34 arrests “for Crowding, Obstructing or Incommoding (DC Code § 22–1307).” Almost half of those arrests were members of Congress: 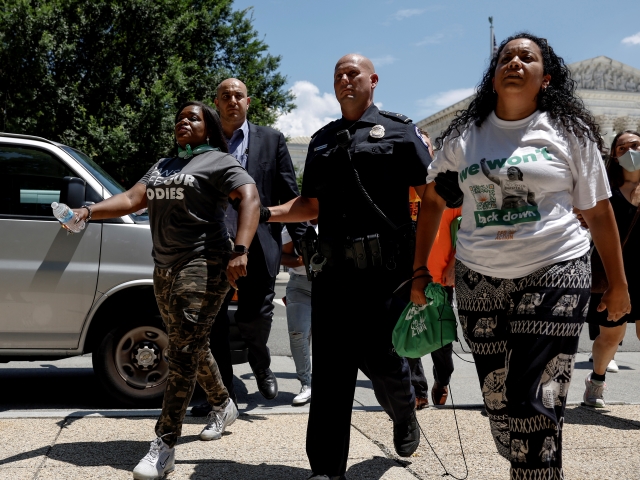 Rep. Cori Bush (D-MO) is detained by U.S. Capitol Police Officers after participating in a sit-in with activists from the Center for Popular Democracy Action (CPDA) in front of the U.S. Supreme Court Building on July 19, 2022, in Washington, DC. (Photo by Anna Moneymaker/Getty Images) 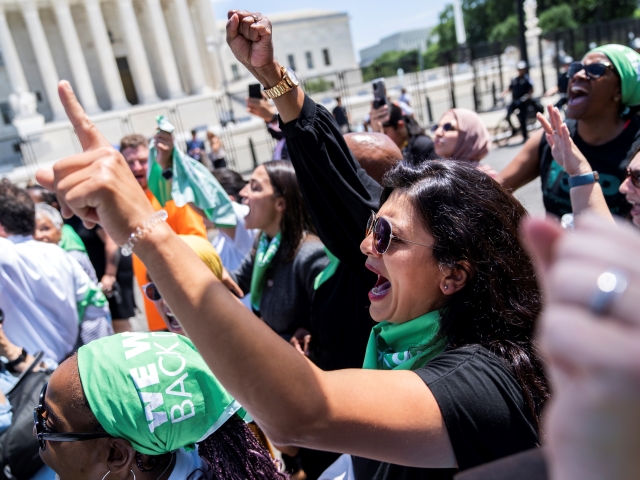 The protest comes weeks after the Supreme Court overturned Roe v. Wade, sending rules and restrictions on abortions back to the states.