The Hill: Inflation, Fear of Recession Could Cost Joe Biden and Democrats ‘Dearly’ in Midterms - Tucker

President Joe Biden and congressional Democrats are facing a grim outlook this midterm season as high inflation and fears of a recession remain high on voters’ minds, according to the Hill.

In August, the Biden administration signed the Inflation Reduction Act passed by Congress, hoping it would help lower inflation and gain them an advantage in the midterms. Instead, as Breitbart News reported, the bill was focused on climate change and healthcare initiatives and is more likely to increase inflation over the next couple of years since it would add to the budget deficit.

Some Democrats were also hoping that decreasing gas prices from the record-highs earlier this year would resonate with voters. However, fuel prices are still up 19.7 percent from a year ago, and the national gas prices average has also been inching closer to $4 per gallon again.

With overall inflation climbing to 8.2 percent — combined with increasing food, apparel, shelter energy, travel, and health care costs from last year — and a 0.4 percent jump in August, the nation’s poor economic outlook could lead to substantial losses for Biden and congressional Democrats this midterm cycle, the Hill reported. 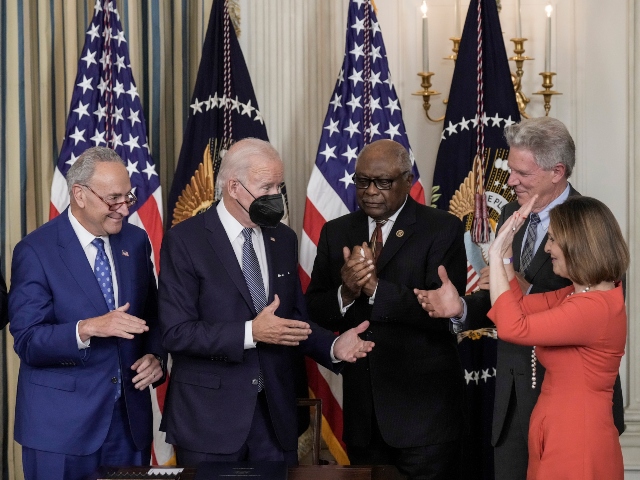 “The latest inflation report could cost the president and his party dearly, all while deepening the risks facing the US economy,” the outlet wrote.

Republicans are hoping to capitalize on voters’ anxieties toward the economy, which appear to be reflected in polling data.

According to a recent Harris Poll, 37 percent of voters said inflation was the most important issue, while 29 percent identified the economy and jobs as their top issue. Furthermore, 53 percent of independent voters believe the U.S. is already in a recession, per an Economist/YouGov poll found earlier this week.

“You go to the grocery store and everything is more expensive and quite often more expensive than the last time you were there. It’s hitting families’ budgets, it’s hitting their psyche, and it’s the number one issue on the campaign,” Doug Heye, a Republican strategist and former spokesman for the Republican National Committee, told the Hill.

Many economists and GOP members cite the $1.9 trillion American Rescue Plan — pushed by the Biden administration and congressional Democrats — as the primary catalyst for current inflation, which Republicans have pushed in their campaign messaging.

“Wages are down, prices are up, and Democrats have no one to blame but themselves. Americans know a Republican vote in November is a vote for lower prices and a strong economy,” stated RNC Chairwoman Ronna McDaniel on Thursday via the New York Times.

While the Hill noted that some Democrat strategists hope to highlight their attempts to mitigate inflation and claim Republicans do not have a plan, the messaging does not appear to be swaying likely voters’ intentions for the November 8 elections.