Pollak: With ‘Semi-fascist’ Speech, Biden Throws Away Whatever Mandate He Had - Tucker

President Joe Biden threw away his governing mandate on Thursday evening with a prime time address that described his political opponents as enemies to democracy, and demonized half the country as violent extremists.

It was an act of unprecedented dishonesty and demagoguery, made worse by the fact that the news networks gave Biden time to spew his propaganda as if it were a genuine matter of national interest.

The speech was also bizarrely fascist in its stagecraft. Biden was flanked by Marines, with Independence Hall behind him bathed in red light. It looked like a Chinese Communist Party event, or worse; social media erupted with comparisons to Nuremberg in 1938.

It was unworthy of the office.

Let us first consider the word “fascist” — the “semi” is superfluous, a way for Biden to pretend he isn’t using the first, while using it.

“Fascism” used to mean something. The U.S. fought a World War against fascism — against the fascist regimes that murdered tens of millions of innocent people. Some of the victims are remembered at the U.S. Holocaust Museum; some are remembered at the Auschwitz concentration camp, where President Trump sent the first U.S. delegation to an annual “March of the Living” in 2019. 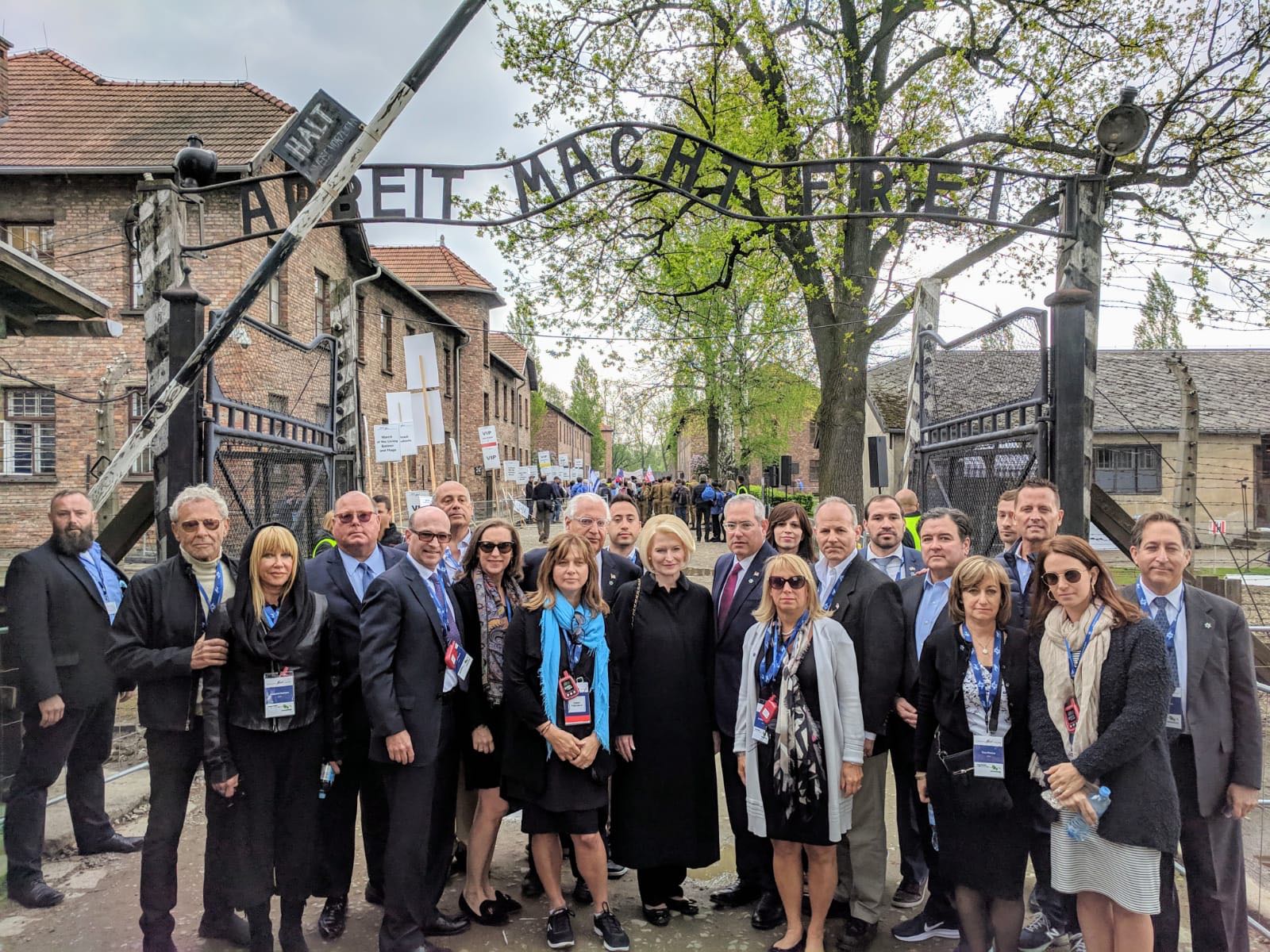 AUSCHWITZ — The first-ever U.S. delegation to the March of the Living annual Holocaust memorial arrived at Auschwitz on a somber Thursday morning, bringing several ambassadors and envoys in a show of solidarity against antisemitism. (Joel Pollak / Breitbart News)

To use the word “fascist” to describe Americans who voted for the last president, and who support the minority party in Congress, is to desecrate the millions of victims of actual fascism, as well as the memory of those Americans who gave their lives to defeat it.

The only reason Joe Biden is president is because he promised to unify Americans — though he was not always clear about that: he kept telling voters that he was waging a “battle for the soul of the nation,” which is an oddly martial way to describe coming together.
But voters, weary of riots, division, and chaos saw in him what they wanted to see: the only Democrat with a demonstrated history of working with people from across the aisle, the only one who dared — however belatedly — to condemn political violence in 2020.

In his Inaugural Address, Biden used the word “unity” eight times — repeating it, at several junctures, for emphasis. “[T]o restore the soul and to secure the future of America – requires more than words. It requires that most elusive of things in a democracy: Unity. Unity.”

True, Biden did not include absolutely everyone: unity meant working together against the forces of “political extremism, white supremacy, domestic terrorism.” But few Americans thought when he excluded those extremist categories, he meant them.

Biden’s presidency is effectively over. He may be in office, or — in deference to his junta décor — in power, but you cannot be the president of a democracy and declare war on half the nation. He will never again be viewed as legitimate, to the extent he ever was.

In the week leading up to the speech, the Biden White House was given opportunities to clarify that his attacks on what he called “semi-fascism” among “MAGA Republicans” were not attacks on Republican voters. But the president and his spokespeople usually failed to draw that distinction. Press Secretary Karine Jean-Pierre said that “when you are supporting an authoritarian figure” — meaning Donald Trump — you are fair game: “[W]e need to say something. [President Biden] is not going to shy away from that.”

According to Jean-Pierre, the terms “semi-fascist” and “extremist” were justified for three reasons.

First, she claimed, Republicans have used violent rhetoric. She cited several comments — many of them jokes — that, while bad, were no worse than Biden’s habit of talking about beating up President Trump.

Second, she claimed, Republicans want to take away people’s “rights” and “freedoms” — i.e. Republicans are pro-life. When a journalist asked her if the whole pro-life movement was “semi-fascist,” she did not disagree.

Rather, she argued that “extremism” means having policies that are only supported by a political minority. That is not “defending democracy”; that is totalitarianism, the tyranny of the majority. Democracy exists to allow debate among different points of view; Jean-Pierre wants to preclude that debate by declaring opposing views off-limits.

Third, she cited January 6, the riot on which Democrats have pinned their midterm hopes, exaggerating it into an “insurrection” to demonize all Republicans — even those who condemned it.

Biden’s attack on half the country is unprecedented.

President Barack Obama, who once gave a speech about unity, likewise did the opposite in office. He trashed Republicans to their faces, and accused them of making “common cause” with Iran. But even he had empathy, albeit condescending, for GOP voters.

Trump was elected by Obama’s targets to fight back. He inflamed existing divisions, often outrageously so — but no matter how offensive his “mean tweets” were, he rarely targeted ordinary people, reserving his attacks for politicians, journalists, and celebrities.

Biden’s awful rhetoric is partly a reflection of Biden’s character: he has always been irascible, infamously attacking reporters before his first presidential campaign collapsed in 1987, and demonizing Supreme Court nominee Robert Bork.

But his contempt for roughly 75 million Trump voters also represents the broader hostility of the left toward the “deplorables,” and the wish that they would simply disappear, along with their allegedly “white supremacist” constitutional values.

It is, by now, customary for Democrats and unscrupulous journalists to refer to every Republican presidential candidate as Hitler. What is new is attacking the Americans who vote Republican.

One Democratic Party surrogate told MSNBC this week that the “MAGA Republicans” — i.e. Trump supporters, the overwhelming majority of the GOP — “are a domestic terrorist cell operating in America.”

Most people agree it is permissible to do literally anything to stop Hitler, or terrorists. This is going to a very bad place.

Liberal commentator Juan Williams tried to blame the Capitol riot of January 6, 2021, for the change in rhetoric. But as fellow Fox News Sunday panelist Karl Rove pointed out, Biden delivered his Inaugural Address about “unity” after the January 6 riot.

Rather than heal the wounds of that shocking event, Democrats have ripped those wounds wider, making sure the riot remains firmly in public view, trampling the rights of 475 and centuries-old due process protections to sell the story of “insurrection.”

Biden broke the basic promise of his presidency on Thursday night. His address was an attack on the country’s foundations, delivered at its sacred birthplace. Even some journalists, inclined to defend him, were shocked. He has lost his mandate, never to be regained.