“They’re tactical nukes — they’re just bigger versions of what a conventional attack would be,” said Neil deGrasse Tyson, a Harvard-trained science and “science communicator.” He said on the October 15 show:

Modern nukes don’t have the radiation problem …  it’s a different kind of weapon than Hiroshima and Nagasaki … in the way that we used to have to worry about with fallout and all the rest of that. What you really have to worry about is being vaporized and after that, if you’re not vaporized, blown to bits by the shock wave. That’s a way bigger problem that you’re going to have.

The dismissal of nuclear weapons is sharply different from the widely shared view during the Cold War. Back then, nearly every official and commentator recognized that any limited use of nuclear weapons would likely spiral out of control into a city-smashing nuclear war, amid the emotion and danger of the crisis.

These days, deGrasse Tyson is an emotional supporter of President Joe Biden and a reliable progressive. For example, he supports much of the transgender ideology that is being pushed by Biden. He is now backing Biden’s policy of providing unconditional support to Ukraine — and many billions of dollars in weapons.

The public fear of nuclear weapons is problematic because the weapons were the foundation of the 1948-1991 Cold War standoff, he said:

Nuclear weapons: Their very existence birthed the Cold War and holding the world hostage for 60 years or 50 years, it was. That was a travesty in the history of civilization.

What I want to say is, there’s a reaction to news that is a little bit out of proportion with what they actually do. Because for example, we talk about Hiroshima and Nagasaki and you look at the death toll and it was nuclear weapons and everyone is reacting. But wait a minute, a few months earlier in Tokyo, we had an overnight fire-bombing raid that killed more people than the sum of both of those atomic weapons … The point is: Why we focusing our conversation on nukes when there’s so many other ways war kills people … Outlaw war!

The direct conflict between Russia and the alliance of Ukraine and the U.S. is about territory — the peninsula of Crimea, plus the provinces of Luhansk and three other districts in the Donbas region of east Ukraine.

Russia is simultaneously offering to negotiate a deal — while threatening to use nukes — amid Ukraine’s use of devastatingly accurate U.S. weapons.

However, both U.S. and Ukrainian leaders are dismissing negotiations amid the Russian threats of nuclear war. The Washington Post reported on October 11:

Privately, U.S. officials say … they have ruled out the idea of pushing or even nudging Ukraine to the negotiating table. They say they do not know what the end of the war looks like, or how it might end or when, insisting that is up to Kyiv.

“That’s a decision for the Ukrainians to make,” a senior State Department official said. “Our job now is to help them be in absolutely the best position militarily on the battlefield … for that day when they do choose to go to the diplomatic table.”

And Ukrainian officials now say they have less appetite to negotiate than ever before, given their recent battlefield successes and Russia’s illegal annexation attempt.

On October 7, Biden joked about Russia’s battlefield losses to U.S. weapons — such as the Excalibur satellite-guided artillery shell — and threatened Russia with nuclear attacks if it starts using nuclear weapons against Ukrainian forces.

A growing number of U.S. and European officials suggest the war can be used to depose Russian dictator Vladimir Putin.

Some liberals are urging Biden to respond blow-for-blow with nuclear-armed Putin.

“There needs to be a response to the extent [Putin] goes in that [nuclear] direction,” TV host Michael Smerconish told Maher. 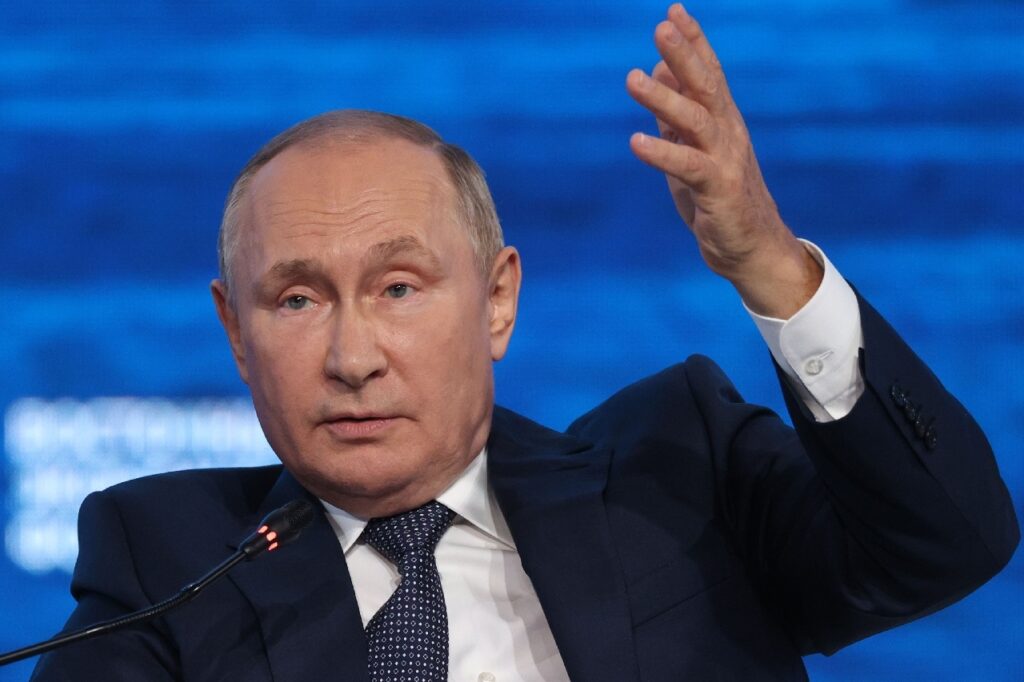 “It is,” replied Smerconish, adding:

I don’t know how you avoid that. The alternative — to just keep your powder dry — you can’t do. Biden’s word would be completely worthless … and NATO’s word … To me, it’s kind of reminiscent of a failure to bomb the tracks going to Auschwitz-Birkenau [Nazi death camps] when we had intelligence that said “Here were the atrocities that were being committed against Jews.” So if you saw nuclear weapons being moved into position [against Ukraine], and we have that capability, and they were going to be launched at Ukraine, how could you not act?

“Maybe it’s the right thing [for Americans] to die for the Donbas province being on one side of that [Russia-Ukraine] border … Is that what you want the average American to say?” Maher responded.

I  want the average American to say that we’ve all professed “Never again!” Here’s an instance that maybe it’s not predicated on religion, but it is that kind of a scenario. So do we mean it or not?

The status of Crimea is a key issue in the war, partly because Russia regards it as a Russian province and as vital to the security of its coastline along the Black Sea. The peninsula saw three years of brutal battles during Russia’s war to survive Naziism. In the 1850s, Russia defeated a naval invasion of Crimea by Britain and France.

Yet the United States is backing Ukraine’s claim to own the Crimean peninsula, which was captured in 1783 by Catherine the Great from the Turks.